…is the slow and steady presentation of situations or things that would typically create an unwanted or strong response, but at a level that is so low that this negative reaction does not happen. Desensitisation can decrease or even eliminate these responses, by slowly getting the individual used to the activities that trigger those reactions.

For example, a dog that is afraid of bicycles may start by being exposed to them from a far distance. The dog will likely notice the bicycle and will learn to eventually ignore it. The next step would be to gradually decrease the distance between the dog and the bicycle. Overtime, this can lead to the dog tolerating bicycles at a much closer distance than before. 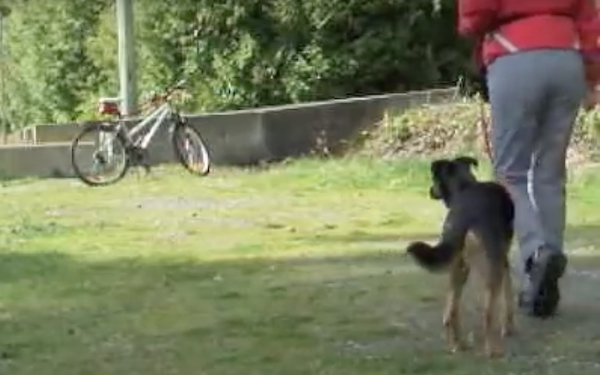 …is a process that can change how an individual feels about a certain thing or situation (also known as changing the emotional response). The new response or reaction will be a more pleasant one and will be incompatible with how the individual used to respond in the past. Counterconditioning is often used to address problematic behaviour related to emotions, such as anxiety, fear and aggression.

To do this, the situation that results in the negative response is paired with something that is very pleasant to the individual, such as food, play or praise. This will create an alternative and more desirable response (also known as a positive emotional response).

For example, for a dog that is afraid of bicycles, seeing a bicycle can be paired with something that the dog really likes, such as food or a quick game of tug. With some repetition, the dog will associate the presence of the bicycle with food or play. This will change the way the dog feels about bicycles and the dog might even start to like to see bicycles (a positive emotional response has been established).

Desensitisation and counterconditioning are often paired together to achieve better results.

For example, a dog that is afraid of bicycles can see them so far away that the dog barely notices them (desensitisation). When the dog sees the bicycle, some delicious food can be offered (counterconditioning). Over time the dog can start to see the bicycle closer and closer (desensitization) and still continue to receive food, which will result in a better and more positive response (counterconditioning).

Here is a video about how desensitisation and counterconditioning can be used to help dogs.

Ethology is the study of animal behaviour in their natural environment. Includes a behaviour repertoire that is within the realm for that species. Canine ethologists study…you guessed it…dogs!

Ethology involves observation and interpretation of specific behaviors and groups of behaviours in context.
Three scientists are considered the fathers of ethology:

Here is a great summary video of the 4 questions of ethology. Can you give a dog example instead of the video host’s cat meow example?